Welcome to the ARES section of our site.

This page covers different aspects of our ARES program within Gregg County. There is an ARES participant registration page available for those who are registered for the site and who are interested in participating in Gregg County’s ARES and Skywarn programs. Please note that this form is only available to logged-in users. Before registering, please consult the Participant Guide, under the EmComm Compendium in the right-hand sidebar for participation requirements in either or both programs.

There is also a separate page for Skywarn, accessible from the menu pull-down above. This page has information regarding the Skywarn net, several radar loops, forecast data, and current severe weather advisories. 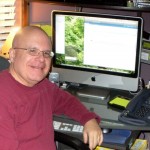 Over the years, I have come to appreciate the efficiency of packet modes. I have always lived in areas where it was necessary to have stealthy antennas and operate at lower power levels. Packet modes, like PSK31 are ideal for QRP operations.

Another packet mode that I have always enjoyed is APRS. Most people think of APRS as merely a position reporting mode, but it is actually much more than that. It has the ability to send short messages, much like SMS on a cell phone. It is also used to transmit weather station data to the Citizen Weather Observer Program (CWOP).

While the above modes are good for short messages, what about longer messages like what you would see in an e-mail? What if you needed to transmit these messages over long distances or in a situation where your area’s Internet access has gone down like in an emergency or disaster?

As part of my working with the ARRL North Texas Section ARES leadership, the use of the Winlink 2000 infrastructure is being encouraged as an alternative to voice in passing emergency message traffic outside of an area affected by an emergency incident. Voice (phone) is not always the best method of transmitting more complex messages or data.

Instead of me explaining the history and overview of Winlink, I will let the Winlink Development Team do that at the following link:

A Brief Guide to the Elements of Winlink 2000

As part of my investigation in setting up the various Winlink clients and gateways, I have been looking at possible uses in emergency situations. Let’s look at an example scenario. Let us assume we have an incident where normal first responder communications and internet access have become inoperative. Let us further assume that we are at an EOC or at a shelter being run by a served agency (like the Red Cross), that facility is now operating on emergency power, and the normal infrastructure of LAN and computers is still intact. In either case, we might have multiple users that need to pass message traffic.

Since most of those people would be used to operating a computer and dealing with e-mail, wouldn’t it be a good fit if we could pass that kind of traffic out of the area via radio to a location that has Internet access? The diagram below details a Winlink topology that accomplishes just that: 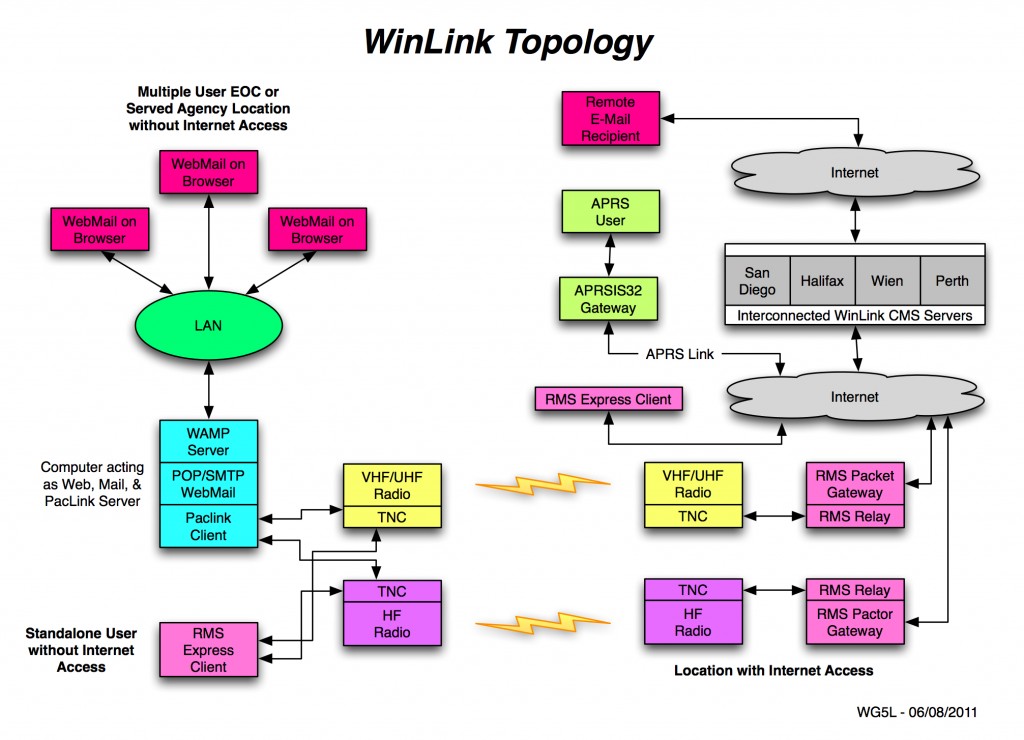 On the left hand side of the diagram, we have a location without Internet access, but has the ability to either use existing computers and LAN or quickly set up that network. On that network, a computer is setup with PacLink (a Winlink client), WebMail, and a WAMP Server. PacLink is a Winlink client that can work in conjunction with a POP/SMTP mail server (WebMail) and a WAMP Server that is a Windows-based Apache web, MySQL, and PHP Server. That server combination serves as Web Mail Server and WinLink client. PacLink interacts with both the WAMP Server and either a VHF/UHF or HF Radio. The end users of this setup use their web browser to access the Web Mail Server/PacLink client to send and receive e-mail. The end users still do not have Internet access, but they can send/receive e-mail via this setup. From an e-mail perspective, they have no idea they are communicating over a radio link… it is transparent to them.

Another nice aspect of Winlink is its ability to accept messages from APRS users via its APRS Link. Because messages are shorter in APRS, the messages have to be formatted in a specific way, but it is a nice integration with another portion of the Amateur Radio packet infrastructure.

I have tested these setups at my home and it is a very workable solution for multiple user scenarios. In investigating the software and topology for Winlink, what has become apparent to me is that we, as Amateur Radio operators, are first and foremost communicators. For many of us, our expertise extends beyond the Amateur radio bands to include computers, networks, and communications infrastructure in general. This is especially true in emergency situations.

In the coming months, as we look into our overall communications plan for Gregg County, I am hopeful that Winlink will become an integral part of that plan and our infrastructure. 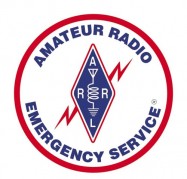 Our training net has been suspended for the time being pending someone assuming the responsibilities of net manager. Stay tuned for further announcements.